I want to begin with this image, taken last Saturday morning: 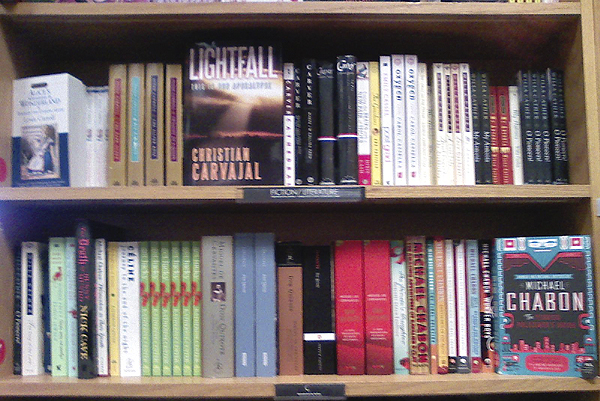 That's what I saw when I walked into the fiction section of the Borders in Tacoma, Washington. I immediately shot the image on my phone cam and sent it to a few dozen people. The attached message was an abbreviated version of the following paragraph:

The authors listed here are Lewis Carroll, me, Raymond Carver, Willa Cather, Miguel de Cervantes (Don Quixote, the Nobel Institute's "Greatest Novel of All Time"), and (an idol of mine) Michael Chabon. "One of these things is not like the others. Tell me, can you tell me which one?"

I felt enormous pride as I looked at this pair of shelves. I'd made it. The proof was right there. Clearly, item one of my bucket list was a fait d'accompli. Then I sat down for my well-organized, Weekly Volcano-publicized signing. After two hours, I had sold not one single book, despite talking to several interesting people and handing out cards and bookmarks. I moved my flyers around and waved at people in the coffee shop. An hour and a half after that, I still hadn't sold a book. Worse yet, I couldn't even give away individually wrapped Twinkies and Zingers! Coming on the heels of an Oklahoma book tour in which I made plenty of contacts but sold relatively few books, the experience was devastating. I'll confess that when I went by my publisher's office on the way home, I was in a dreadful mood, and try as I might, I'm sure I acquitted myself poorly. I think more than anything I felt like a failure. Maybe no one handles that gracefully.

I've been accused of bipolarity, and while that's stretching things, it's certainly fair to say I have "an artist's temperament." (I know, because fair people say it with unnerving regularity.) Used to be, I'd find myself in self-recriminatory funks that would last for months. These days my turnaround time is only about six or seven hours, especially in response to the skillful application of social interaction and alcohol.

According to the extremely useful Author 101: Bestselling Book Publicity by Frishman and Spizman (the least popular DC superheroes), "Few authors actually make money from the sales of their books. Most, especially first-timers, receive meager royalties and they don't get them until their publishers recoup whatever advances they paid....The best way for authors to strike it rich is to harvest other benefits from their books (p. xviii)." I didn't realize at the start how true this would be. Indeed, I indulged myself in the foolish notion, reinforced by my optimistic publishing company, that I could "strike it rich" enough to pay off my credit card, perhaps even that graduate student loan from the mid-'90s. I'm reminded of the time my ex-wife's divorce attorney saw me on TV (I had just begun Hollywood extra work, which pays minimum wage) and angrily demanded half my new fortune. She estimated it in the neighborhood of a quarter million dollars. I eagerly replied that if she could find it, she was certainly entitled to fifty percent of it. I didn't tell her she'd have better luck searching for the lost Ark of the Covenant.

So here I am, glory rich, money poor. I never used to care about any of that. I thought forty thou a year at Warner Bros. was living the dream, as I paid an exorbitant Hollywood rent and drove a Ford Escort I bought from my kid sister. Now I'm in love with a practical woman. She owns a condo--well, the part the bank doesn't own, anyway--and drives a sports car I refer to as "the Batmobile." She has a retirement plan and (I'm pretty sure) an investment portfolio. She clips coupons but knows her way around Europe. I, on the other hand, ate roadside tacos in Tijuana once. True story. Living the dream.

On the other hand, I've walked the red carpet at Hollywood premieres. I've partied with celebs. I've directed plays and indie shorts in the toughest entertainment market on Earth. I've written for one of my favorite magazines. I've ridden an elephant and lain on a bed of nails. I've had sex on a rooftop and been complimented by a Playmate of the Year (though not, it must be admitted, at the same time). I've insulted Jean-Claude Van Damme to his face, and I lived to tell the tale. And now, I'm a published author, whose book is on a shelf amid talents, the hems of whose literary garments I'm unfit to touch.

So why was I so damn unhappy?

I know my publisher hasn't recouped its investment yet. I know I'm a rank amateur when it comes to book promotion and tour management, and for "rank" you can substitute "incompetent." I know I've let people down. That weighs heavily on me. I think some people, even friends, believe I've been launched into a higher tax bracket, and maybe they think I look down on them now. These are not towering heights, Gentle Reader. Waves of money are not pouring in. How do you convince bookstores in Peoria, Illinois to take a chance on a first-time novelist? We don't know. We're still trying. Statisticians disagree whether the book business is up or down over the last two years, but it's absolutely doing a great job of edging out the little guy via sweetheart deals between distribution superpowers. The publisher says we won't know how we're doing for months, maybe years, and there are times when that's a difficult slogan to rally behind.

Imagine my chagrin, as they say, when I read numbers like these: First novel by Danielle Trussoni, Angelology, 88,000 copies shipped. First novel by Karl Marlantes, Matterhorn, 117,000 copies in print. Sarah Palin's first book, Going Rogue, over 2.6 million copies in its first six weeks--and she didn't even write it.

On the other hand...

Several thousand of those copies were bought by Palin's own political action group, according to ABC News. Tussoni's first novel wasn't her first book; her memoir Falling Through the Earth was a New York Times Book of the Year but is currently available for two bucks on Amazon. Of Marlantes' Matterhorn, the Seattle Times reports: "[For 33 years] no one would publish it. He kept revising. In the 1980s, no agent would even read it. In the 1990s, he was told to cut it in half and make it about the Gulf War. In the 2000s, same advice--except to switch the story to Afghanistan....Originally published by a small press, El Leon Literary Arts, Matterhorn was slimmed down and 'speeded up a bit' by the editors at Atlantic, says Marlantes. He was delighted when a Portland bookstore sold 100 copies of the earlier version."

Maybe it's long past time I gave myself a break. Maybe it's time I realized I've accomplished something extraordinary. Amanda assures me that for all her practicality and success, she envies my life of adventure. A staggeringly talented opera singer, she shied away from a life of chasing a dream--which so often feels like chasing the dragon--and now she wonders what might have been. I, on the other hand, regret nothing. Nothing. And I'll tell you something else: I will never regret the years I spent putting myself out there, because you know what? It finally worked. I'm on a shelf with goddamn Lewis Carroll. That is something. That is...well, that's more than enough to make a man delighted.

Amanda asked me if I'd still write if I never made a dime. I've thought about that for days. I've been writing since I was three; why stop now? I probably couldn't if I tried. I'm a writer. I tell stories. I chase the dragon and live to tell the tale. That's who I am. That's what I do. That's me. And if people don't like what I have to say, well, then they shouldn't buy my book. That's on them. If they think my outspokenness makes me a bad person or unfit for the woman I love, then they should ask her or my friends if they agree. Otherwise, they can write their own damn book to debate me if they think they can manage it. Put me down for a copy, in fact, and I'll look forward to their Borders signing.

I don't know if this'll ever pay my bills. Maybe not. Maybe I'll have to keep plugging away at my (actually quite enjoyable) day job in order to throw my fair share of centavos into the family coffer. But "I would rather be ashes than dust!" Here's the "Credo" as ascribed to Jack London: "I would rather that my spark should burn out
in a brilliant blaze than it should be stifled by dry-rot.
I would rather be a superb meteor, every atom
of me in magnificent glow, than a sleepy and permanent planet.
The function of man is to live, not to exist."

I've been living, not existing, for forty-one years. That's who I am. That's what I do. I write books. And after decades of hard work, one of my books is finally hitting shelves in two states. More will follow. I may never sell 2.6 thousand copies, let alone 2.6 million--but at least I wrote every last one of them. And y'know what? I sold quite a few of them, too.