It had been a tough spring. The world was in complete chaos. Closer to home, I was underemployed, and I failed to land three different teaching jobs I wanted very much. My wife was beginning to worry I'd morph into one of those guys who sits around the house paying video games and dozing through one TV series after another on Netflix. It turns out I work pretty hard when I'm unemployed, so I had numerous irons in the fire, but the disappointment and depression were weighing on me heavily.

That was when my friend Ned Hayes discovered he had a smash hit with his third published novel, The Eagle Tree [1], which you should buy the second you finish reading this. Some guys would buy a sports car or summer home; not Ned Hayes. He's actually holding down a day job that pays him just fine, so instead, he's put his newfound lucre into a longstanding dream project. A generous patron of South Sound theatre, Ned resolved to publish a periodical called OLY ARTS. This magazine would focus exclusively on art and culture in Olympia: especially theatre, but with serious excursions into music, visual arts and special events. To that end, he aimed his debut issue at an annual downtown tradition here, Capital Lakefair, which tightened his print date to Wednesday, July 13.

Ned first mentioned this project to me about two months ago. His idea was I would act as Managing Editor while he continued to work for [global tech giant, redacted]. Essentially, my job was to serve as copy editor and point man for a writing and distribution staff. There was still one big hurdle: advertising. We had to sell some and fast. To that end, Ned resolved to create a 12-page dummy edition, the "spring 2016" issue, to show potential advertisers as an example of the thing we were about to create. Would I be willing to craft that dummy issue in InDesign, subject to Ned's direction, and have it finished in two weeks? Uhhhhhm...sure. I mean, I'd never worked with InDesign, but how hard could it be? I signed my contract on May 18.

I learned the essentials of InDesign over the weekend while looking for past articles I could use as presentable lorem ipsum. (That's a phrase I learned on this project. It means filler copy.) Ned and I turned that "spring issue" around in record time, and if you didn't look at it with your glasses on, it looked like a no-foolin' magazine. 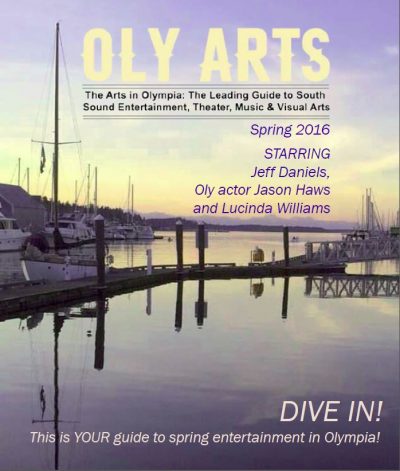 Meanwhile, Ned was setting up the infrastructure for our new website, OlyArts.com [3]. I was mocking up fake ads and the basics of our summer edition. Ned hired a real designer, Dorothy Wong, and a staff of writers and distributors. I now have the privilege of assembling the work of some of the best arts writers in town, including Guy Bergstrom, Alec Clayton, Jennifer Crain, Molly Gilmore and Kelli Samson. I wrote tons of content myself for our website and calendar, only to rewrite the whole mess a week later when we learned we needed a more robust calendar plugin. Have you visited our website [3]? It's freakin' huge. Ned and our ad rep, Rick Pearlstein, landed upscale advertisers. I learned the basics of MailChimp and Sprout Social to create a weekly newsletter and post regular social media updates. Ned hired people to write our mobile app for Android and iOS, available soon.

Long story short, we've produced TWO magazines, a massive website with an active arts calendar, a thriving social media presence, most of two mobile apps, and T-shirts for Pete's sake in two months, plus gathered a staff of seven great writers and seven extroverted distributors, all in two months. I've worked like crazy on this thing. I won't lie; it has my fingerprints all over it. But what amazed me throughout is the amount of time, effort and expertise Ned put into this project, not to mention startup capital, all while holding down a big-boy job and raising two great kids. That job, by the way, moved to Portland this summer, so he's been driving back and forth to another state three times a week. I had the opportunity to drive to our printer with him yesterday and watched him use his truck as a mobile office. To be honest, I assumed he benefited from some fancy [global tech giant, redacted] setup that allowed him to do his job vocally while his eyes were on the road. Not so much! Ned does it all on his everyday cell phone and, I suspect, 5-Hour ENERGY Shots.

I still write for the Weekly Volcano, by the way. OLY ARTS covers Olympia only, we don't do reviews, and it's all separate content, so there's no conflict of interest. But for the most part, I spend my days now as a quarterly magazine editor. Some days it's fun. Some days it's...less fun. Some days it's stressful, especially when the mistakes I'm frantically struggling to correct were my mistakes. That happens often. I can tell you without fear of exaggeration there hasn't been a day in the last two months when I haven't learned something major, often something I should've known before accepting the job. This will make me a better writer, editor, manager and friend to the Oly cultural scene. It feels to give back. I was a good critic, I think, but isn't a job that I miss.

The summer edition, our grand debut, is available now. Find our T-shirted street team at Music in the Park, Capital Lakefair and its associated parade, and a number of other events over the next three months. Meanwhile, I'm already planning our fall edition. OLY ARTS is here to stay. 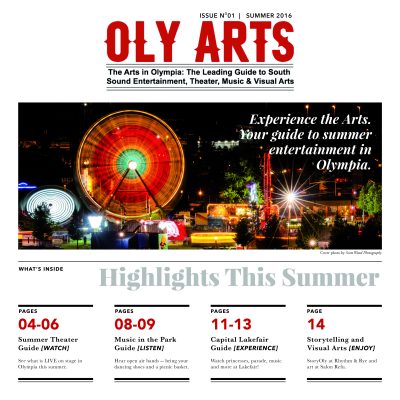 Now, how cool and classy is that?