Coming this Wednesday, July 29, at 7 p.m. in the Midnight Sun, we're delighted to invite you to Wordstock Olympia 2015! This is a one-night-only event at which four local authors will share the stage, with actors reading passages from their works. Even better, it's absolutely free.

Alec Clayton [1]: When not skewering local talent with his art and theater reviews for The News Tribune and Weekly Volcano, Alec creates worlds upon worlds of fictional characters that live mostly in the small towns among the dense pine forests and swampy coastal bogs of South Mississippi where he grew up. He has published seven novels including the “Freedom Trilogy,” which includes the selection to be read by Christian Carvajal and Amanda Stevens.

Christian Carvajal [2]: "Carv" writes all sorts of things under his own name and sexy stuff using the pen name Lynn Savage. He's the author of two satiric novels. One, an apocalyptic thriller called Lightfall, is available in hardback or ebook from Campanile Press. The second, Mr. Klein's Wild Ride, is a brand-new ebook from Amazon, Smashwords, and ChristianCarvajal.com. He's asked his friend, actor Deya Ozburn, to read a new story, "Retreat," set in the same world as Mr. Klein's Wild Ride.

Dianne Kozdrey Bunnell [3]: It took Dianne ten years to write her novel The Protest, which was inspired by the real-life religious hijacking of her two daughters, ages ten and twelve. She believed that if her story saved other families from such calamity, then some good could come from the firebombing by the blood of the Lamb her girls endured. Today, she is happily reunited with her daughters. The Protest, a passage from which will be ready by Dianne herself, was chosen as “Reviewer’s Choice” by Midwest Review of Books. One reader claims she figured out how to read the book while blow-drying her hair.

Ned Hayes [4]: Ned gets to talk a lot in his day job for Intel and as a published critic, professor, and theater producer...so he got picked by his fellow introverted writers to be MC for this event. Accolades for the MC are welcome, rotten tomatoes not so much. His new book, The Eagle Tree, is the tale of an autistic young man on a desperate environmental crusade. He's the author of the bestselling historical novel Sinful Folk, which was nominated for the Pacific Northwest Booksellers Association Award, and a crime novel called Coeur d'Alene Waters. Actors Jackson Jones and Amanda Stevens will read a passage from The Eagle Tree.

This event will be hosted by Theater Artists Olympia, stewards of the Midnight Sun Performance Space at 113 N. Columbia. Concessions will be available for a small charge, and reservations may be made at the event for TAO's next offering, Improbable Peck of Plays 4. Improbable Peck also celebrates local writers by staging (often debut) productions of their short (less than 15-minute) plays. Carv's "An Imperfect Galatea" was performed in Episode 3. This year, he's appearing as an actor in three short plays, one of which you might just see a glimpse of on Wednesday.

Of course the authors will have copies of their works available for purchase and signing, but again, the event itself is absolutely free. Seating is limited, so don't arrive late and miss your chance! We look forward to entertaining you, and in the meantime, happy reading! 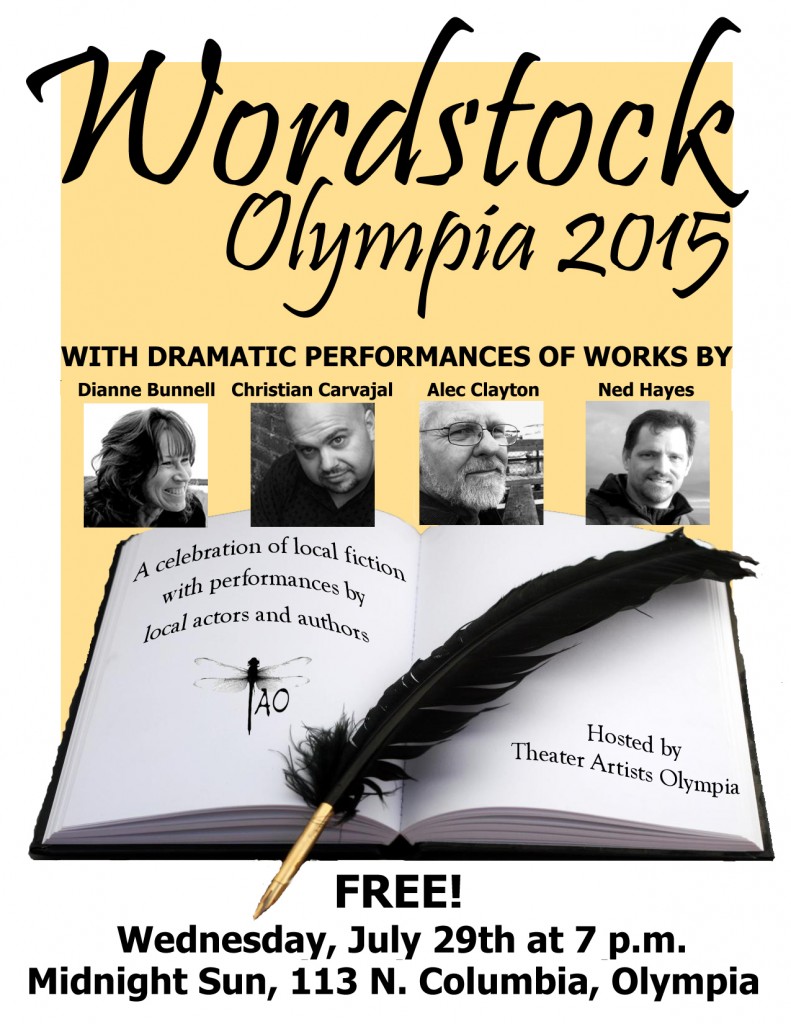