Many, many thanks to everyone who came out for Wordstock Olympia 2015. We had a full house on a hot Wednesday night in an insufficiently air-conditioned theater. Our loyal friends were rewarded with a short clip from Eva Suter's "Glory, Glory, Vanish," soon to be presented in full as part of Theater Artists Olympia's Improbable Peck of Plays 4. Then Dianne Kozdrey Bunnell read from her engrossing novel The Protest, which concerns the fundamentalist annexation of a family. I had the great privilege and pleasure of watching Tacoma actor Deya Ozburn read "Retreat" (which you can also read for free here).

After a brief intermission, Olympia actors Jackson Jones and Amanda Stevens read a chapter from Ned Hayes [2]'s forthcoming YA novel The Eagle Tree, in which an autistic teenager wages a memorable environmental campaign. Then Amanda and I read an episode from Alec Clayton [3]'s charming novel Visual Liberties, the concluding installment of a trilogy set in fictional Freedom County, Mississippi.

Our program marks the start of an effort to extend the wonderful work Creative Colloquy is doing in Tacoma to Olympia. There's been talk of making Creative Colloquy a regular Oly event at a business near Capitol Lake. I'll keep you posted. In the meantime, the full house to which some of you contributed means we'll do this again...though probably not in the heat of the summer! Remember, we owe our space to Theater Artists Olympia, whose Improbable Peck debuts a week from Friday (i.e., August 7). That anthology of short plays features local writers as well, and I can tell you from personal experience (as I'm acting in three of the short plays collected) that this is an excellent program well deserving of your money and attendance. I hope to see you there! I'll be the guy in the horned Viking helmet. 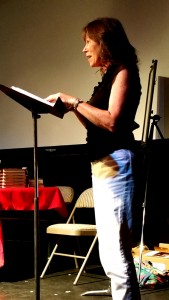 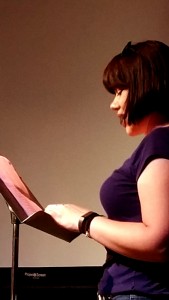 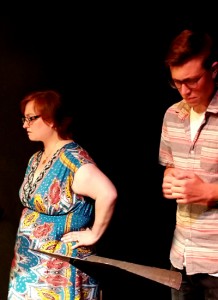 Amanda Stevens and Jackson Jones read from The Eagle Tree