Hi, folks! Lynn Savage here. It's appropriate that my book, Mr. Klein's Wild Ride, should be reintroduced on Carv's Thinky Blog, as it was Carv who first got me interested in its subject. He wrote an article called "Pilgrims in Pornland" for Western Zeitgeist, a pop culture journal for which I contribute a love/sexuality column. His primary source for that article was Gary Klein, an L.A. marketing guru who served as brand manager for Bliss Panerotic. Bliss, of course, was the controversial amusement park that opened and closed so spectacularly on Catalina Island in 2015. It promoted itself as a getaway for swingers, honeymooners, and other couples and singles interested in expanding their sexual boundaries in a safe, modern resort environment. A flyer for the park appears below. 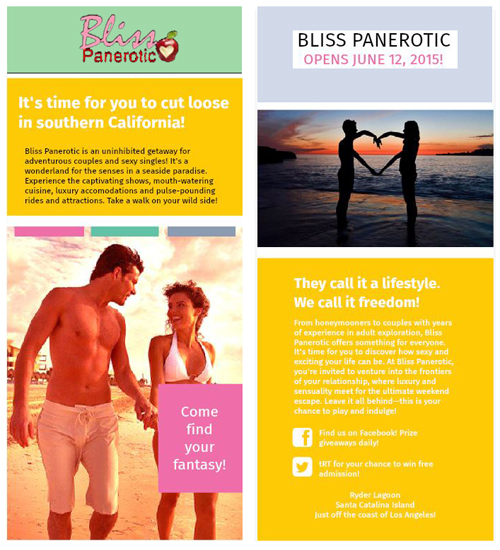 Of course, the project was plagued with shaky publicity from the start, but Klein did much to dispel the concerns of investors and potential visitors. The Realms of Eros multi-user computer game created in support of the park is still selling in the millions of copies. Klein can hardly be blamed for the project's downfall--but when you think (or tell a joke) about Bliss Panerotic, his may well be the first name that comes to your mind. Carv introduced me to Gary this last year, and I communicated with both men frequently through the final stages of park construction. While I was unable to attend the grand opening, it was the expense of a trip to southern California rather than any controversy that scared me away. In retrospect, of course, that was fortunate, but so was my access to Gary. He's an interesting fella who has much to say about the Bliss Panerotic debacle, what the resort aspired to be, and what it means in the context of modern relationships.

So, you may ask, is my book, taken straight from a year of interviews with Gary, sexually frank? You bet your naughty bits it is. Will it turn you on? I sure hope so. Will it inspire you to think about sex, love and marriage in the twenty-first century? I believe it will. Some of you had the chance to read the e-book last year, but now things are heating up again! Watch this space for more details!